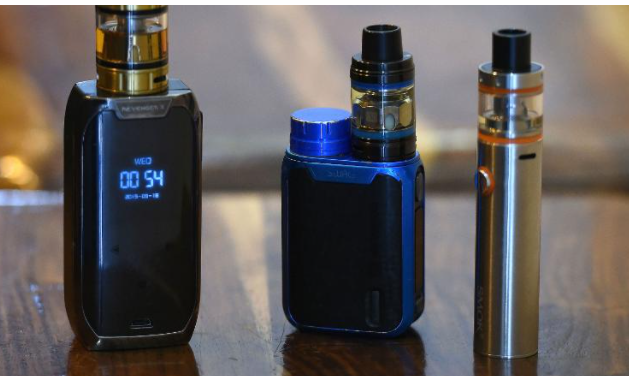 Vaping has tremendously grown in the recent past to become a popular trend. From Hollywood’s crème de la crème to music stars and top athletes, vaping is becoming so popular among celebrities that we can’t just ignore it.

If you’re keen on most celebrities’ lifestyles, you probably know they are part of the statistics on the ever-increasing number of vapers. The uncertainty on the safety of vaping seems not to deter most of them from embracing the culture. This article highlights the current list of 10 celebrities who prefer to vape.

Di Caprio is one of the top Hollywood A-listers who’ve embraced the vaping lifestyle and made it his own. His most recognizable vaping moment was during the 2016 Oscars when he pulled out his box mod vape and began to vape. Vaping was subsequently banned at Oscar’s events.

Di Caprio still fancies having his box mod with him at the red carpets or the awards gala. The Los Angeles-born award-winning actor is famed for his roles in Titanic and the Wolf of Wall Street.

Johnny Depp is the father of vaping in Hollywood. He started the vaping trend on and off the big screen before other celebrities joined him on the list. However, he’s more into box mods than the ordinary vape pens. He has been severely pictured with a box mod in movie premiers.

Born 55 years ago in Kentucky, Johnny Depp could be the celebrity vaper you aspire to be. He has made vaping look so cool, and there’s no doubt many have been influenced. There are rumors he vapes regularly after filming scenes. His 2010 film titled Tourist has a scene where he’s cast vaping on a train.

Unlike other celebrities on this list, Katy Perry reportedly vapes for relaxation. She has recently demonstrated her enthusiasm for vaping on many occasions. One of the most occasions was during the Golden Globes event, where she was pictured vaping with Orlando Bloom.

The “Firework” and “Roar” hitmaker began vaping in 2013.  Since then, she has never been ashamed of vaping or connecting with other vapers alike. She reportedly loves carrying her vape pen when hosting parties, among other entertainment events.

Paris Hilton at least doubles up as an actress, singer, DJ, and socialite. She’s one of the most easily recognizable global celebrities with a penchant for vaping. Paris Hilton started vaping a few years back, and she’s since been pictured with vape devices many times on social media. She still vapes up to date.

Simo Cowell was well known for his traditional nicotine habits before making the switch. In defense of his vaping culture, he claims vaping is better because it allows him clean hits with flavors. Thankfully you can get cbd oil vape pen in the market. The famous American idol panelist started vaping shortly after his son’s birth.

Lindsay Lohan has been a darling for many fans since her days under the Disney stable. However, most people still associate her with substance abuse, a culture she managed to let behind. She reportedly started vaping in 2011 and has been enjoying every bit of it until now.

Lohan made the switch to vaping as a containment measure for her traditional nicotine habit. Even though it wasn’t the best way to deal with a problem, it seems to have helped her cope. Quite often, she has been pictured relaxing with a vape mod.

Lady Gaga is a global superstar boasting hit songs such as Poker face. She was previously known for her traditional nicotine habit before becoming apparent that she had joined the vaping gang.

For those who follow her lifestyle closely, it’s not surprising to see her carrying a vape device when going about her daily life.

Bruno Mars started vaping to give up traditional nicotine consumption. He did this in honor of the promise he made to his mom to quit consuming traditional nicotine. His first public moment with a vaping device was in 2013, where he tweeted a picture of himself holding a vape device.

Since then, the pop star has never looked back. He is an investor in one of the leading vape brands reportedly.

Like Simon Cowell, Samuel L. Jackson is another former user who has fallen in love with vaping. He mostly loves powerful vaping devices like vape mods and pods. Jackson has been occasionally photographed vaping in Hollywood events and even in public poetry readings.

The Washington, DC-born actor famed for his roles in movies like Django Unchained, A Time to Kill, and the Kingsman is a role model for many young and upcoming actors. You can also find pictures of his vaping tradition on his social media pages.

The English actor is known for his reasonably unrestrictive nature around his lifestyle choices. Many times, he’s been spotted carrying a vape device.

Famed for his lead role in the hit series Twilight, Robert Pattinson is a previous traditional nicotine user. He may have made the switch as early as 2012 and seems to be enjoying his new vaping culture.

The vaping trend may not be ending soon after all. With many celebrities now embracing the culture, we shouldn’t be surprised if it ultimately becomes a global trend.